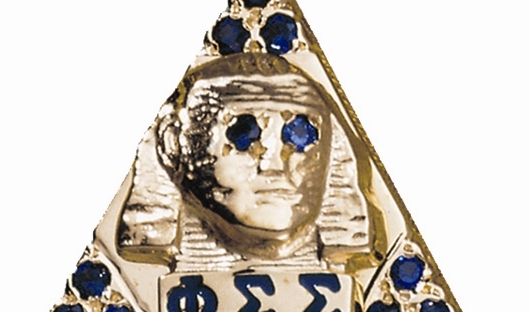 In 1994, I was a sophomore at Emerson College. Emerson was weird, artsy and quirky. There wasn’t a “quad” there was “the wall.” There wasn’t homecoming, there was the Evvy’s. And there were a group of women who wanted to do their own thing.

Traditional Greek Life wasn’t for the women who were to become the founders of the Theta Kappa Chapter of Phi Sigma Sigma. We didn’t fit the traditional sorority mold (or what I thought it was then).  We didn’t dress alike, we weren’t all the same major, we didn’t look alike and we didn’t share the same faiths. We were however, the most ambitious, independent, outspoken group of women perhaps I have ever known.  We started our chapter because we wanted something different. We wanted something our own.

I will never forget that day in April 1994, on the third floor of the student union, dressed in white when we built to the walls of the Phi Sigma Sigma pyramid.  When I graduated in 1996, I retired my letters and put my beautiful gold pyramid pin in its original box and tucked it away in a drawer.

10 years later, I was in a dark place. I left San Francisco to move home, broke up with a man I thought I was going to marry, struggled with depression and turned 30. I landed in a place where the only support and friendship I felt I had was my great dane, Cheyenne.  Craving a community of women, I reached out to the Phi Sigma Sigma headquarters, joined a local alumnae group and began volunteering.

In the years that I volunteered for Phi Sigma Sigma, first as the International Standards Board Coordinator and then as a Chapter Key Advisor, I began to apply and live our core values; lifelong learning, inclusiveness and leadership through service.  By becoming an active volunteer, I learned to thrive again. My confidence was renewed and began to aim high.

Today marks 99 years of sisterhood in Phi Sigma Sigma. When I read the email from our Grand Archon this morning, and she wrote: “10 young women decided the friendship they shared transcended the opportunity to join existing sororities” it made me smile and think of Emerson.  While nearly all of my Theta Kappa sisters packed away their letters after graduation, just as I did, whether or not they realize it, each of them lives by the Creed of Phi Sigma Sigma.

Each of them are women of substance, character and influence. However many years have passed and miles there are between us, I am happy to have shared the experience with them. We chose Phis Sigma Sigma and Phi Sigma Sigma chose us for a reason.  As for me, it’s time to volunteer again. I can’t think of a better way to continue to improve myself, than to surround myself with women who are the strongest, most passionate leaders I know and  continue in every facet of their life to aim high.

Talk to me! Cancel reply